Is animal death justified by cosmetic experiments? That's not fair. Although for a large group, it will seem necessary.

After using a mascara at the beginning of the 20th century, a woman was left blind, a fact that motivated the United States Food and Drug Administration (FDA) to pass the Federal Cosmetic Food and Drug Act in 1938, a law that was protected by many countries. In other words, the cosmetic industry began testing live animals such as rats, rabbits, mice, monkeys, among others, applying cosmetic products to see their reactions and thus determine whether or not they are available for use.
In Spain, since 2013 this practice is prohibited, but there are many traditional brands that put the phrase not tested on animals on their products for pure commercial interest, which raises doubts. There are very few recognized brands of cosmetics that can ensure that they do not experiment on animals.
This practice is currently permitted in the Republic of Korea and Taiwan. As for the United States, Canada, Mexico, Japan and ASEAN (Association of Southeast Asian Nations, consisting of Malaysia, Indonesia, Brunei, Vietnam, Cambodia, Laos, Burma, Singapore, Thailand and the Philippines), it is neither prohibited nor require animal testing.
Pain, stress, and death are what these animal experiments cause. More than 500 thousand lose their lives every year worldwide, after they use them, they are sacrificed. And all to guarantee human health.

But what do they do to animals? 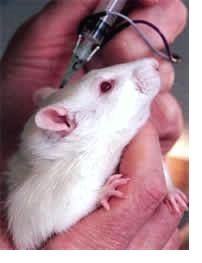 They are forced to ingest or inhale the compounds. Groups of approximately 200 specimens are needed to measure the toxicity of an ingredient. The study ends once 50% of the study population dies. The objective is to know the amounts in which it is dangerous to consume a substance for human beings.

Rabbits or rats are forced to ingest or inhale cosmetic ingredients, or the ingredient is applied to their shaved skin, every day for 28 to 90 days. Then they kill them. This test includes "skin sensitization" (guinea pigs with their skin shaved that are exposed to the substance, or through the ears of rats to check for allergic reactions.

The rats are fed the substances for two years to see if it causes cancer. They are then slaughtered for analysis.

Pregnant rabbits or rats are forced to ingest substances and then euthanized to evaluate their fetuses for toxicity.

Rabbits or rats are forced to ingest the substance and are then euthanized to examine the absorption, metabolization, distribution, and excretion of the chemicals in their organs.

Currently, these methods are being progressively replaced by others in which living beings are not needed to test cosmetics, but for their definitive worldwide abolition, we have to wait. Meanwhile, we can learn about and try natural cosmetics, a cosmetic that respects life, be it human or animal, a more intelligent cosmetic that uses non-toxic ingredients, quality raw materials that take care of the health of consumers, therefore, you do not need to sacrifice animals of any kind to guarantee well-being, products that also respect the environment.

It is time to ask yourself if your cosmetic brand uses rats, mice, monkeys, rabbits, monkeys or pigs so that you can buy and apply their products.

Enter the code in the box below: